Obligatory talking out the arse.

It always happens. After a well-publicized attack, all the experts come crawling out of the woodwork, sharing their 'knowledge' and insight. Why it happened, why Pit Bulls are or are not 'bad dogs', should or should not be wiped off the face of the earth. The stuff coming out of the mouths of the breed-haters is pretty maddening. Like this gem, from Justic of the Peace Treviño : "No one needs to keep these types of dogs. These dogs turn on you." Thanks, Justice. Now we know.

But perhaps nothing makes us grit our teeth more than when the they-should-know-betters start spouting nonsense that has no basis in fact. Dog trainer Cyndee Kendrick, cautioned owners to avoid games of tug, or anything that would require a Pit Bull to use its jaws. She said the game would mimic the conditioning used for dog fighting. Sorry, Ms. Kendrick, but playing tug with your dog won't turn him into a fighter. And what about people with other breeds, should they too worry that playing tug will turn their little Poodle into a fighting champion?

Nevermind the fact that dog fighting requires aggression towards other DOGS, NOT towards people. If tug DID turn your dog into a fighter, that doesn't mean he'd turn around and attack your kid. (Haven't we learned anything from the Vick Dogs? Fighing dogs aren't the monsters the media's always lied to lead you to believe.)

In the same article that quoted Kendrick, a veterinarian by the name of Dr. Steve Bentsen had this to say: "The thing about pit bulls (is that) the majority of them are probably fine. But it's hard to know which ones are fine." Really, Dr Bentsen? The fact is that lots of Pit Bulls across the nation are routinely temperament evaluated and placed in homes on a regular basis, with hairs on no human heads ever harmed. If Dr. Bentsen has a hard time reading Pit Bulls, it may have to do with a lack of education on dog behavior and temperament, not because Pit Bulls are so adept at hiding their true intentions.

Is it really so hard to predict canine behavior? It shouldn't take 8 years of college to understand that irresponsibly kept dogs are prone to getting into trouble. Reading just a bit about the Weslaco tragedy, it becomes very apparent that there was an accident waiting to happen in this home. First, the child's uncle and guardian had purchased the Pit Bull as a guard dog, and he wanted a dog that was aggressive. Pit Bulls are not and were never meant to be guard dogs, and no responsible rescue or breeder would ever place a dog in a home where the dog would be used as such. This dog obviously came from a questionable background. The dog was also kept chained in a yard, and lived under wooden pallets. Little Pedro's guardian says he would let the dog run loose only at night, when no one was around.

This wasn't a pet dog that was socialized and trained, this was a dog obtained for purposes of aggression, chained in a backyard. Chained, unsocialized dogs pose one of the greatest risks to children. The frustration that builds at being chained coupled with lack of social interaction and training makes for a deadly mix.

But the media keeps reporting on these 'loved, family pets' that turn on their owners, kill children, and terrorize neighborhoods. It's too bad that critical thinking is no longer in vogue. Sensation rules the day, and hey why not, since the newspapers make more money. Couldn't the public be better served by material that warns of the dangers of keeping guard dogs chained up in yards where children reside? And what of the responsibility of Child Protective Services, placing a child in such a home?

It is easier to demonize an animal than to take responsibility for ones own actions, ignorance, or neglect. There is nothing wrong with Pit Bulls. It's society that has the problem.

Another tragedy. And when the solution in theory is so simple, why doesn't anyone listen?

Loose dogs, chained dogs, wondering children.....a recipe for disastor. Responsible dog ownership and bite prevention information are the keys. But when parents are so often irresponsible with their own children, how can we expect responsible ownership of a mere animal to matter?

Politicians, wake up. Dogs-at-large should be hit-list priority for police departments. Fines for first time offenders, confiscation for repeat. This is a public safety issue that NEEDS to be addressed. And what sort of programs could be funded by the tickets written for loose dogs? The possibilities are endless.

This isn't about more laws, this is about laws we have now NOT being enforced. This is about HUMANS taking responsibility for their ACTIONS. A dog is just a dog. A dog is not to blame.

And although the witch-burning has already begun, it is never too late for a shot of reality.

Three cheers n' then sum for Liberty Humane Society's Pit Bull-centric program, Bullies Are Deserving Dogs aka B.A.D. Dogs. The best & the brightest bully dawgs are highlighted in this enlightened program meant to give those that epitomize the breed their just reward - the home of a lifetime! The driving force behind this program are the volunteers who are some of the most dedicated and enthusiastic any shelter could hope for. Each week, members of the B.A.D. Dog crew meet up for Pit Bull training classes conducted by Peaceable Canines, helping the star pupils hone their skills, or unearthing the shine of those as-yet-to-be-uncovered diamonds-in-the-ruff. It is an absolute joy to work with these people and chart the progress of the dogs each week. Lots of nice Pit Bull Loves waiting for their forever homes are peaking out of their Liberty Humane kennel runs - go check 'em out! Or, if adopting a dog isn't written in your stars, please consider donating to this worthy organization, a shelter that's 'got it right' when it comes to their Pit Bulldogs.

...or maybe it'll be playground equipment....

Just because someone abuses something or uses it for nefarious purposes doesn't mean that thing is inherently bad or evil. So-called 'fight training' equipment like treadmills and springpoles are things us responsible, law-abiding, dog-lovin' folk use to exercise our nutty Pit Bulldawgs. Has a dog fighter ever used these same things? Sure, but someone's ill-chosen use for an item doesn't make the item automatically ban-worthy. (I think we could say the same thing for some special breed of dog we know & love, too!)

RPB pet peeve: assuming things about a breed/behavior/activity when you don't have the knowledge or training to make a proper assesment.

Visions of dog fighting dancing through your head anytime you see a Pit Bull engaged in some sort of activity? Please, this is a serious condition that requires immediate attention!

We wanted our blog readers to be aware that Sen. Yates' proposal to change the current state vicious dog law to completely eliminate and destroy all Pit Bulls seems to have been halted. Sen. Yates is working with Rep. Webster (a Pit Bull friendly ally) to draft a bill that isn't so, well, morbid. And hopefully no breed specific language will be included - wouldn't it be fab if the current law was amended?

We know you have thoughts - they need to be voiced.

::Breathing a tentative sigh of relief::

Did we say "Please"?

If that sounds like begging it's because it IS. Do whatever it takes to keep your PIT BULL CONFINED and UNDER YOUR CONTROL AT ALL TIMES (no, that's not yelling, it's just a slightly raised voice.....)
Eeesh. What's it gonna take to get owners to listen?

There is NO ROOM for accidents with this breed - their reputation in press circles cannot handle any more "oops" moments from owners.

Doesn't everyone make mistakes? Sorry, Pit Bull owners aren't allowed the luxury of "just one mistake" - that's the way it goes with this breed. There is no "can't" - you must do what a responsible guardian needs to do to prevent their dog from getting loose - leashes, crates, collars, harnesses, 6-foot tall privacy fences surrounding topped kennel runs.

Pit Bulls are escape artists, this much we know. Don't assume your dog cannot get loose...assume he CAN and then take more precautions.

Loose dogs are far from a Pit Bull-only problem - dog owners in general seem lax when it comes to keeping their canines under proper control. Hmmm....if only legislators would see to it that leash and containment laws were enforced, hefty fines thrown at offenders, perhaps some of these reporters would have to spend their time writing about things like, oh dunno, REAL news. 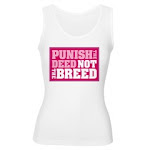