Concerned Pit Bull parents in the city of Garfield came out in droves last night to defend their dogs in the face of a restrictive proposed Pit Bull ordinance that would have required high insurance, muzzling, special leashing requirements, among other things. I attended the meeting to introduce RPB to the council members and let them know that we are here to help educate and address responsible dog care and public safety concerns involving Pit Bulls and dogs in general in their city.

The breed specific legislation was defeated unanimously; in fact the Mayor made it known from the very start of the evening that they would defeat the BSL during this meeting. Regardless, even after the announcement was made, for 2 hours, the public was allowed to step up to the podium and talk about why they believed singling out Pit Bulls was the wrong way to address the very real public safety issue of dog attacks.

There was such a wide range of attendees speaking up for the breed. From NAIA, NJ Federation of Dog Clubs, and American Rottweiler Club reps, to dog trainers, to an adorable young boy who stood before the council and proclaimed his love for his Pit Bull - people from all over, not just Garfield, took to the mic and articulated many reasons why BSL is discriminatory, prejudiced, unfair, and ineffective.

I think my favorite part of the evening was when one councilman stated that this proposed Pit Bull ordinance was a "knee jerk reaction". After the deluge of emails, letters, phone calls, graphs, pictures, etc that rained down upon the council, they realized how misguided that knee jerk reaction actually was. And their eyes were opened. Someone on the council used the term "enlightened". How wonderful it was that not only did a bunch of people come together for the breed and make a difference, but the city council itself was open and willing to be educated and listen.

The point driven home to me was that our elected representatives need to hear from their constituents. They need to know what the public wants, and why they want it. If you don't want anti-Pit Bull laws cropping up in your city-county-state, GET INVOLVED. The city council of Garfield admitted that they had received bad information and had no idea that NJ's state law preempts any local law that would attempt to regulate specific breeds. Because concerned citizens spoke up, the council realized that not only was the proposed Pit Bull ordinance a bad idea from a practical standpoint, it was outright illegal.

I left the meeting feeling an overwhelming sense of pride at being part of the Pit Bull world. Here, people from all walks of life, with many different stories and experiences, came together to support a common goal: preservation of the rights of the breed we all love. Professionalism, courtesy, and gratitude were pervasive. It was obvious the city council was grateful and impressed by the caliber of the attendees, and they thanked everyone for sharing, educating, and for being involved in the process.

On May 27th, at 7pm, another meeting addressing animal welfare issues will take place. One subject will be how best to deal with the issue of dangerous dogs, enforcement of laws, and possibly drafting new laws that would target irresponsible behavior of HUMANS and not punish dogs based on what they happen to look like. Councilwoman Tana Raymond (who proposed the Pit Bull ordinance in the first place) will be in attendance and very strongly encouraged the public to attend and offer alternatives and feedback. She wants people in her city to be safe. Now, because of the input of many, she wants to help make them safe withOUT a breed specific ordinance. It is imperative that the public attend the May 27th meeting and help the Councilwoman and city of Garfield in their admirable mission of increased public safety.

RPB would specifically like to thank: Maryellen Errigo and Rufus (who was our Pit Bull spokesdog for the evening), Debbie Viney from Liberty Humane, Little Darling & Pin Ups for Pit Bulls (who sent a massive amount of information to the city council prior to this meeting), the American Dog Owners Association, Amanda Sheldon who organized the Prevent BSL In Garfield, NJ Facebook group and did wonders to keep people informed and bring everyone together to fight for the dogs, several concerned area residents who met me at the meeting to offer their support and voice their opposition to the ordinance (yo, Diana and Herminia!), and to everyone else who came out, spoke up, and MADE A DIFFERENCE! - thank you!
Posted by Mary at 1:18 PM 6 comments:

JAC's Paws for a Cause 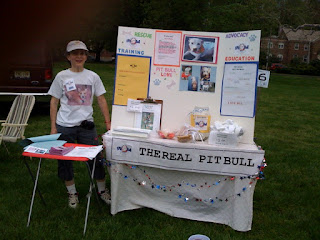 On Sunday May 2, 2010, The Real Pit Bull participated in Jersey Animal Coalition's Paws for a Cause event in Maplewood, NJ. Though there was initially a threat of rain, it turned out to be a beautiful sunny day. The event was fun and lively with music, games, food and vendors. Lots of families, lots of dogs. During the event, we met many of JAC's wonderful Pit Bull "alumni" and current adoptable Pit Bulls. All the dogs enjoyed fresh water and treats at our table. Their people received lots of information including a copy of our free booklet, Introduction to the Pit Bull. The doggies also got a tennis ball/sock toy take home surprise! Folks seemed to truly appreciate the existence of RPB and there was a strong sense of camaraderie centered around the need to stand up for the breed. It was uplifting to be around so much positive energy; we had a great time and are grateful to JAC for allowing us to participate in this event.

Jersey Animal coalition (JAC) is an all volunteer, non-profit, no-kill rescue organization, founded in 1989 whose mission is "to preserve life." JAC has its own shelter in Maplewood. JAC rescues and cares for many, many Pit Bulls.

We are so grateful to Elise for manning the RPB booth at the JAC event!
Posted by Mary at 8:06 PM No comments: Hey you Pit Bull-lovin' party animals! Sunrays Pit Bull Rescue is hosting a for-humans-only event this coming Saturday, May 8th at 7pm at Cold Nose Lodge. RPB will be there presenting the All About Pit Bulls lecture, and providing training tips and tricks.

Join us for a night of education, food, and fun! The event is pot-luck, so bring your favorite foods to share with the group. Email Sonya @ SunRaysPitBulls@aol.com to RSVP.
Posted by Mary at 8:10 PM No comments:

Get a cool tee, support RPB!

Go to www.pitbullshirt.com to order your shirt. Through the month of May, when you mention The Real Pit Bull at checkout, we'll get 10% of the purchase price! Several designs to choose from.